Rising energy demands may mean increasing the role of nuclear

The Turkey Point Nuclear Generating Station in Homestead, Florida is a twin reactor nuclear power station and serves energy to the entire southern portion of the state (700,000 people). The facility is surrounded by an extensive network of cooling canals. Water used to cool the nuclear reactors is sent on a two-day journey from the plant through the 168-mile (270-kilometer) canal system before it is circulated back for reuse. Because the water in the canals is extremely warm and salty, the area has become a preferred habitat and refuge for the North American crocodile. /// Source imagery: Maxar Technologies / 25.394189°, –80.346119°

Nuclear power supplies about 15% of the world’s electricity needs with approximately 450 nuclear powerplants across the planet. Nuclear power generation produces zero carbon emissions and provides reliable energy to the grid. While other parts of the nuclear process such as mining uranium and plant construction do produce carbon, no other energy source provides the same level of output, efficiency, and undisrupted clean energy. That being said, our use of nuclear has been on the decline over the last 20 years and worldwide energy use is projected to increase 50% in the next 30 years. With the effects of climate change becoming more apparent, we should increase the role that nuclear power plays in meeting our energy demands in a safe, efficient way.

The Arlit Uranium Mine is located in Arlit, Niger. French nuclear power generation, as well as the French nuclear weapons program, are both dependent on the uranium that is extracted from the mine – more than 3,400 tonnes per year. /// Source imagery: Maxar Technologies / 18.748570°, 7.308219°

France generates 75% of its electricity from nuclear energy and is an example of how it is possible to safely utilize nuclear as the primary means of energy generation. Uranium does not naturally occur in France, so the country imports uranium mined in Niger to power its plants. France was essentially forced to build its nuclear infrastructure due to limited natural energy resources and the Arab Oil Embargo of 1973. Today, the French have 58 nuclear power plants and plans to build more modern nuclear facilties in the coming years. While nuclear has been a success story there, the French government also plans to increase investment in renewable sources of solar and wind that will drop the percentage of electricity generated from nuclear to 50% by 2030. 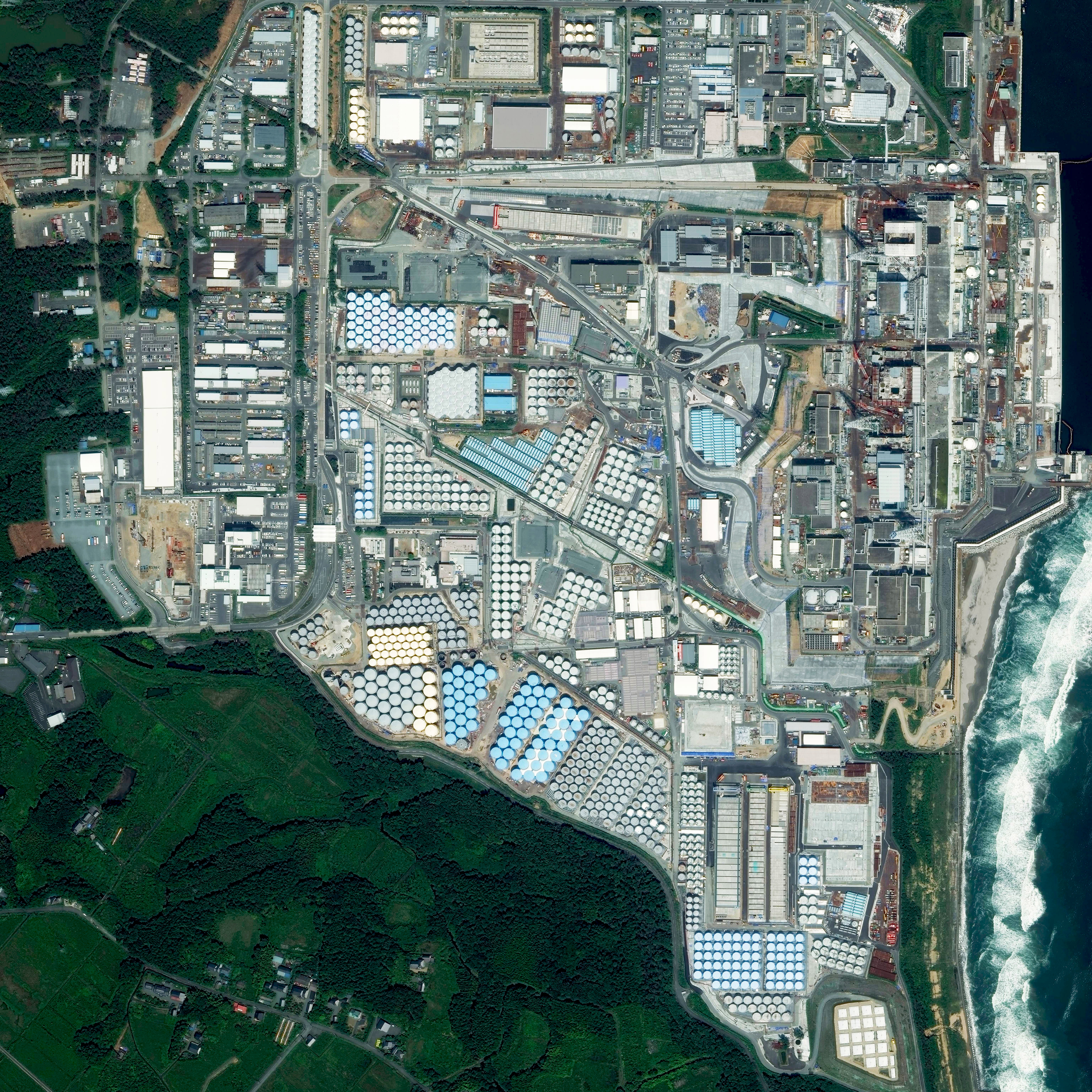 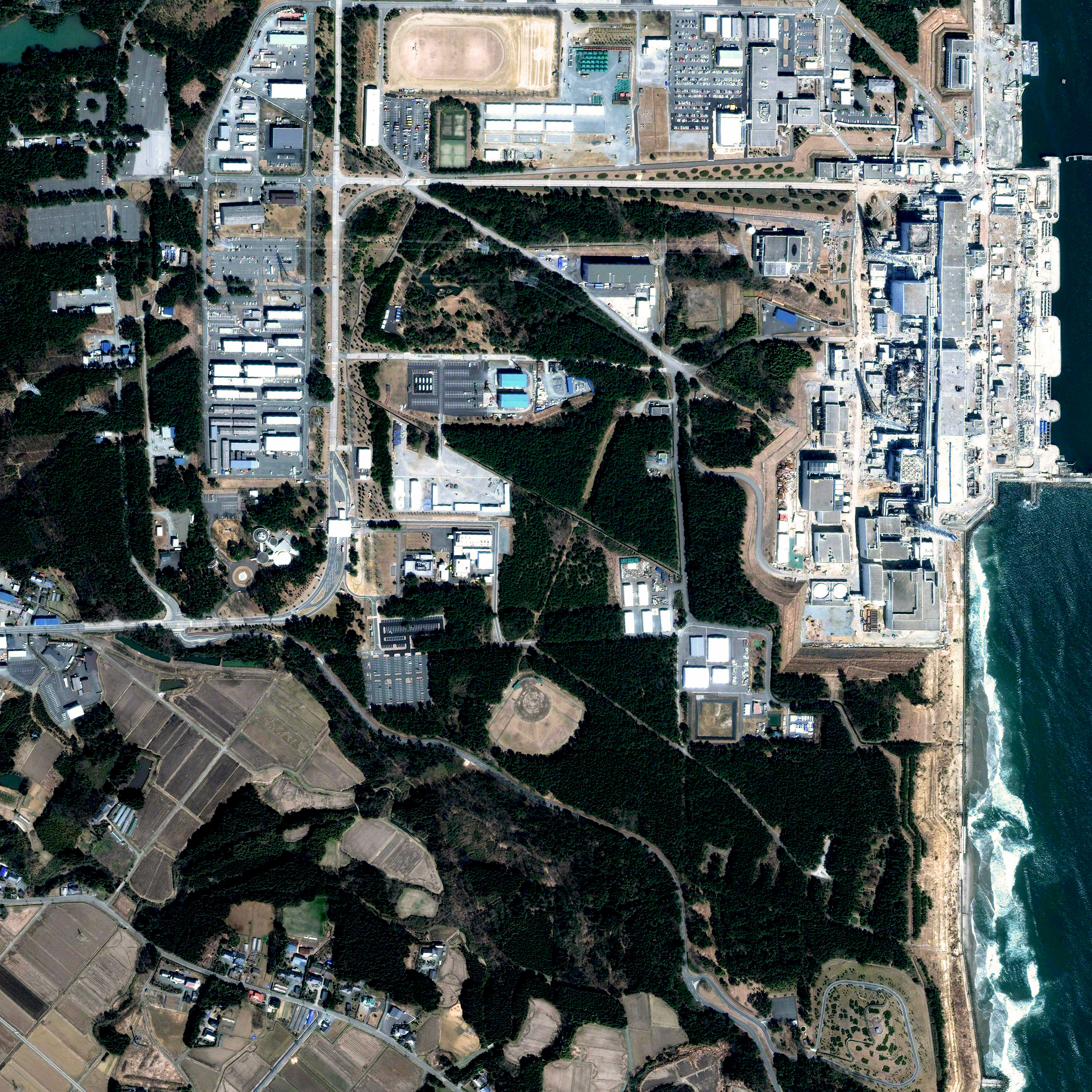 On March 11, 2011, an earthquake with a magnitude of 9.0 – one of the most powerful earthquakes ever measured – struck off the northeast coast of Japan. The resulting tsunami wreaked massive damage across the country, including violent swells up to 46 feet (14 meters) that rose over the seawalls at the Fukushima Daiichi Nuclear Power Plant. Over the three weeks that followed the earthquake, explosions and partial nuclear meltdowns occurred in reactors 1, 2, and 3 (reactors 4, 5, and 6 were not operating when the quake struck). In an effort to contain the water that has been pumped in to cool the melted reactors, thousands of steel barrels (seen in the second Overview) have been constructed at the site to hold approximately 200 million gallons of the contaminated liquid. The cost for the clean-up effort is estimated at $11 billion USD over the next 40 years. /// Dates for Overview #1 – 2011 / Overview #2 – 2015 /// Source imagery: Maxar Technologies / 37.421405°, 141.030850°

Nuclear is not without its downsides of course. First, each nuclear power plant takes roughly 15 years to construct. They are criticized for being expensive, often over budget, and they require heavy government subsidies. More importantly, nuclear disasters have been well documented and the subsequent fear is embedded in the public consciousness. Take the accident at Fukushima in March 2011 (see above) that occurred after a major earthquake caused a tsunami, which flooded the power supply and cooling systems to the reactor, triggering a meltdown. More than 150,000 people had to be evacuated from a 12-mile zone around the facility and a significant amount of contaminated, radioactive water flowed into the Pacific Ocean. We can learn from these disasters and power plants constructed in areas with increasingly volatile climates or flood risks must be built with caution. With the dangerous toxicity of nuclear waste, safe storage and disposal must always be a priority.

Waste ponds are seen at Palo Verde Nuclear Generating Station near Tonopah, Arizona. As the most powerful nuclear power plant in the United States, the facility produces an average of 3.3 gigawatts, or enough power to serve roughly 4 million people. Additionally, since it is the only major nuclear power plant that is not located near a large body of water, this facility evaporates water from the treated sewage of several nearby cities to provide cooling for the steam that it produces. /// Source imagery: Maxar Technologies / 33.389158°, -112.865096°

Nuclear power is already a significant source of clean energy and has potential to improve in the future if further investments are made. For example, China has plans to build up to 400 nuclear powerplants in the coming years as they try to move away from their dependence upon carbon-emitting coal. All nuclear powerplants currently in operation use fission – the process of splitting atoms to generate heat and create steam that spins turbines. Fusion technology represents a possible paradigm shift that would allow energy to be generated from combining atoms, allowing even very light elements (versus heavy, radioactive elements) to be used to generate energy. Continued research in the field of physics at institutions like CERN, home of the largest particle accelerator, will hopefully lead to further advances in the coming years. As we look to meet our ever-growing energy demands now, nuclear offers a low-carbon and reliable piece of the solution.

This aerial view, combined with overlay graphics, shows the size of the Large Hadron Collider (LHC) – the world's largest and highest-energy particle¬¬¬ collider and the largest machine in the world. Located at CERN (European Organization for Nuclear Research), the collider is built in a tunnel 17 miles (27 kilometers) in circumference beneath the France–Switzerland border near Geneva. The ring contains superconducting magnets with a number of accelerating structures to boost the energy of the particles as they move through. The accelerator also contains two high-energy particle beams travel at close to the speed of light before they are made to collide and potentially provide new understandings about how the universe works. /// Source imagery: Maximilien Brice (CERN) / 46.233333°, 6.050000°