An Overview perspective of the U.S / Mexico Border

A series of border barriers draws a stark line between Yuma, Arizona (top) and San Luis Río Colorado in Sonora, Mexico (bottom). San Luis Río Colorado has exploded into a city of nearly 200,000 people thanks to its booming maquila factories. These factories manufacture large quantities of goods at cut rate prices for established American companies. In contrast, Yuma is home to just 96,000 residents. (Source imagery: Maxar)

Running 1,954 miles, the border separating Mexico and the United States is one of the most polarizing demarcations on the planet. For decades, the U.S. government has worked to stem the human current from the South, militarizing the area to crack down on illegal immigration and the transport of illicit goods into the country from Central and South America. The recently departed Trump administration took that charge to new extremes, instituting aggressive policies to push immigration numbers lower at any cost, while championing its mission around the construction of a massive border wall.

Yet, just like the line drawn between these two countries, the United States and Mexico’s border history is anything but a straight line.

Artist Josh Begley's 2016 film "Best of Luck with The Wall" used 200,000 stitched satellite images to convey the scale of the U.S / Mexico border and the challenge posed by the Trump Administration's goal to secure the entirety of its 1,954 miles.

Long before wall-touting political campaigns, the first permanent barrier along the border was actually built by Mexico—a measure designed to keep Americans out. The U.S. / Mexico border separates the state of Sonora, Mexico from modern day Arizona, and effectively cut the city of Nogales into two parts when it was drawn in 1853. Intersecting bustling International Street, the border was little more than a line in the dirt for decades. It was quite common for residents of the two cities to live their daily lives on both sides of the border. In fact, the cities were (and are still) known as Ambos Nogales, or “Both Nogales.”

An elevated view of the first permanent barrier built to restrict human movement across the U.S./Mexico border, constructed under the direction of Sonora governor Felix Peñaloza to keep American soldiers from initiating violence on the Mexican side of the border. Ironically, Peñaloza would be killed by cross-border fighting less than a month later, and a larger wall would be constructed shortly after his death—this time by both sides. (Photograph by W.I. Newumann, From the National Archives and Records Administration)

A tense divide developed with the beginning of the Mexican Revolution in 1910. Mexican troops and revolutionaries fought close to the border and the U.S. moved troops into the area to protect its citizens. After several cross-border skirmishes involving the U.S. Army and suspected gun running from the U.S. into Mexico through Nogales, Felix Peñaloza, the mayor of Nogales, hoped to control the situation by constructing a six-wire, six-foot-high fence in August 1918. The fence ran the length of International Street with two access points for monitored crossings. When he asked U.S. representatives to do the same on their side of the border, they refused. A cross-border firefight a few weeks later changed that (one that saw Peñaloza tragically killed), and soon the U.S. agreed to build a joint fence with Mexico, physically splitting the city in two for good.

A stark line divides the city of Nogales between its Mexican (bottom) and American (top) sides. (Source: Maxar)

Still, Ambos Nogales quickly learned to live around the wall. According to The New York Times, Mexican business owners built saloons that straddled the border during Prohibition, allowing American patrons a legal drink if they were on the correct side of the building. Fences changed shape and form, but crossing the border became a way of life in Ambos Nogales. By the time the Trump administration started to hype building a wall on the U.S. and Mexico border, the two Nogales had been living with their own wall for nearly a century.

Nogales isn’t unique. In fact, by the time the Trump administration began its border wall project shortly after former President Trump assumed office in 2017, 654 miles of wall or barrier had already been built along the border. During his presidency, Trump built just 15 miles of new primary barrier (he also replaced 350 miles of wall and barrier during that time).

The U.S./Mexico border wall separating San Diego from Tijuana stretches 14 miles and doesn’t end where the land meets the water, stretching several hundred feet into the Pacific Ocean to deter water crossing. While the north side of the border is primarily secondary barrier and barren hillsides, the city of Tijuana stacks up against the southern border, its Plaza Monumental bullfighting ring a vestige of the Spanish that once ruled both sides of the border. (Source Imagery: Maxar)

Still, the physical wall was only part of the barrier that ultimately grew during the Trump presidency. Policy placed a new set of obstacles along the border, including the Trump administration’s instantly infamous policy of separating families at the border as part of a “zero tolerance” approach to illegal immigration, as well as mandating that foreign asylum seekers wait on the Mexican side of the border for their respective asylum hearings, a policy known as “Remain in Mexico.” The latter led to the creation of refugee camps along the Mexican border in places like Matamoros, where over 2,000 migrants at a time lived in tent cities along the Rio Grande overlooking Brownsville, Texas. 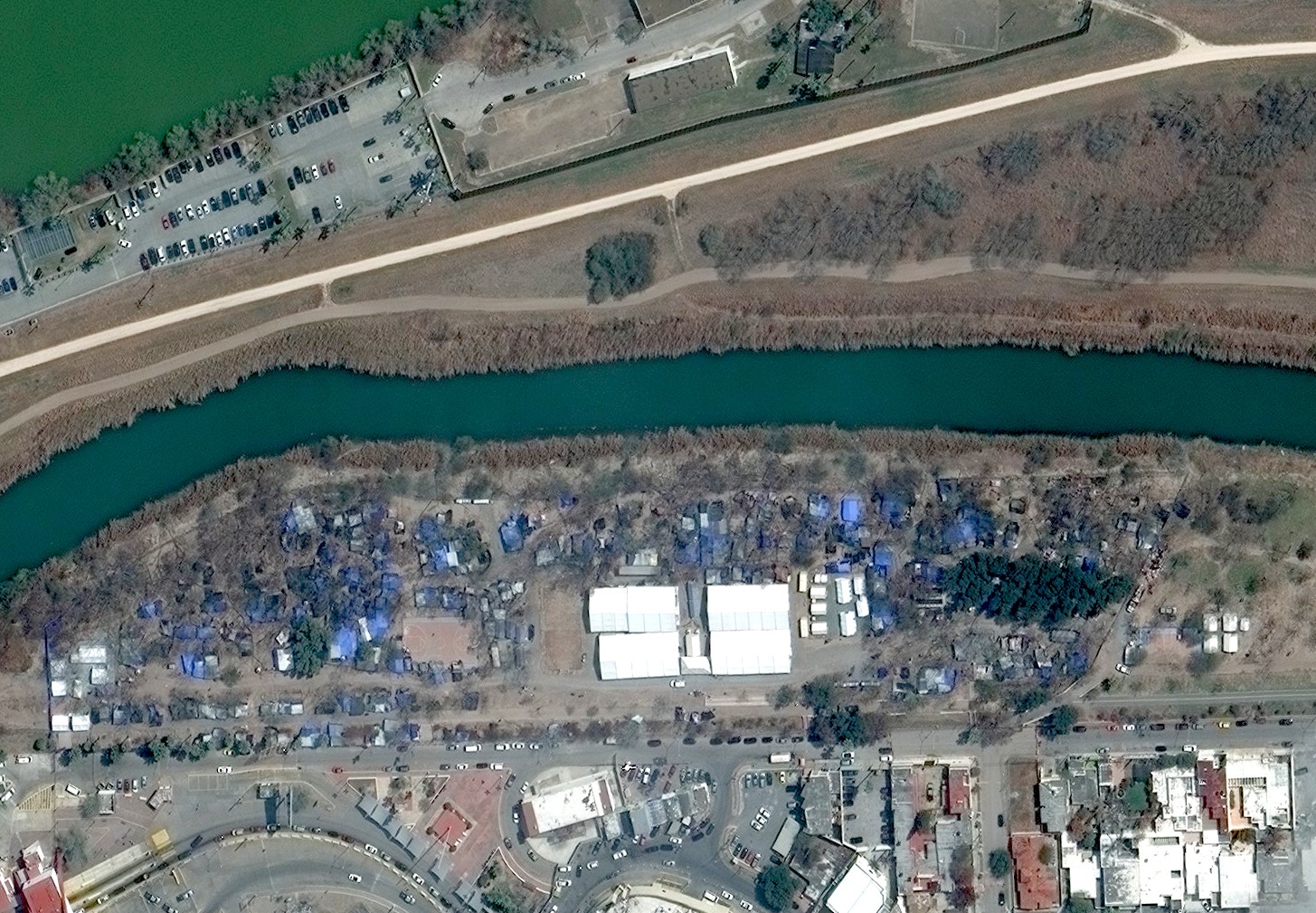 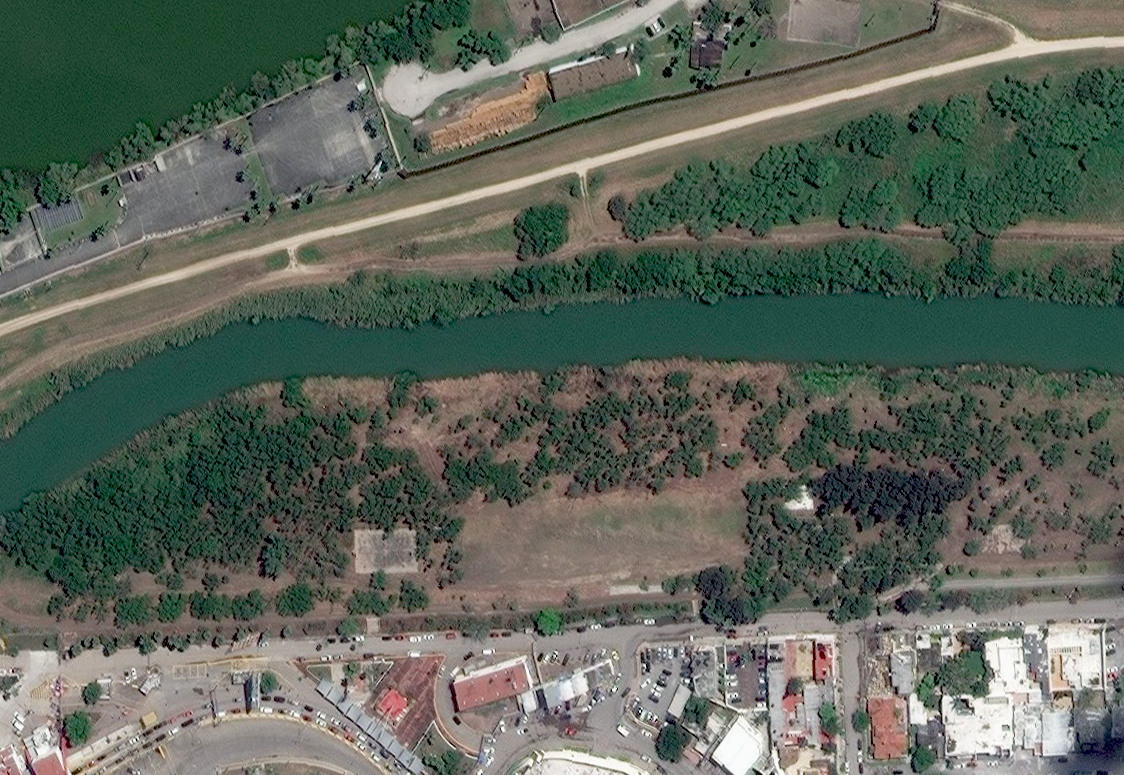 Image 1: March 21, 2019 / Image 2: March 3, 2021 | Due to the Trump administration immigration policy “Remain in Mexico,” that required asylum seekers to wait for their asylum appointments on the Mexican side of the border, thousands of refugees set up camp along the Matamoros side of the Rio Grande, just across the river from Brownsville Early College High School, in Brownsville, Texas. The camp has nearly entirely dispersed under the new Biden administration, who reversed “Remain in Mexico” in February. (Source imagery: Maxar)

The border situation has changed under the Biden administration, but new problems have already sprouted up along both sides of the fence, as a pandemic- and climate-fueled influx of young people crossing the border has put even more pressure on a stretched border-control system. The Matamoros camp cleared out in late February after the reversal of the Remain in Mexico policy, but new immigrant detention centers have popped up on the American side of the border. As of March 30, over 4,100 migrants, many of them children, were crowded into a facility in Donna, Texas. This center has come under fire for its poor living conditions in recent weeks.

While the border wall project seems to have stalled for now, the U.S./ Mexico border continues to be a tricky line to navigate for politicians and migrants alike, a line that indelibly connects the two countries past, present, and beyond.

In Nature We Trust