Is the end of the line in sight?

The Navigator of the Seas was the largest cruise ship in the world upon its commissioning voyage in 2002, and it remained so until 2005. It is now only the thirtieth largest ship as the industry continues to build larger-capacity models to keep up with growing customer demands. /// 25.778951°, -80.170621°, Source imagery: Nearmap

Cruises have come under intense scrutiny in the last few weeks for the role they have played in the spread of COVID-19. As a result, the industry is seeing a historical decrease in bookings and passengers. While this will certainly lead to economic hardship for some, less cruises means good news for the planet. Cruise ships are among the least efficient and most pollutive means of moving about, yet last year over 25 million people took a cruise. While the shipping industry accounts for 2-3% of global emissions, with cruises making up roughly 10% of that figure, the cruise industry has had a disproportionate impact on our air quality and our oceans. 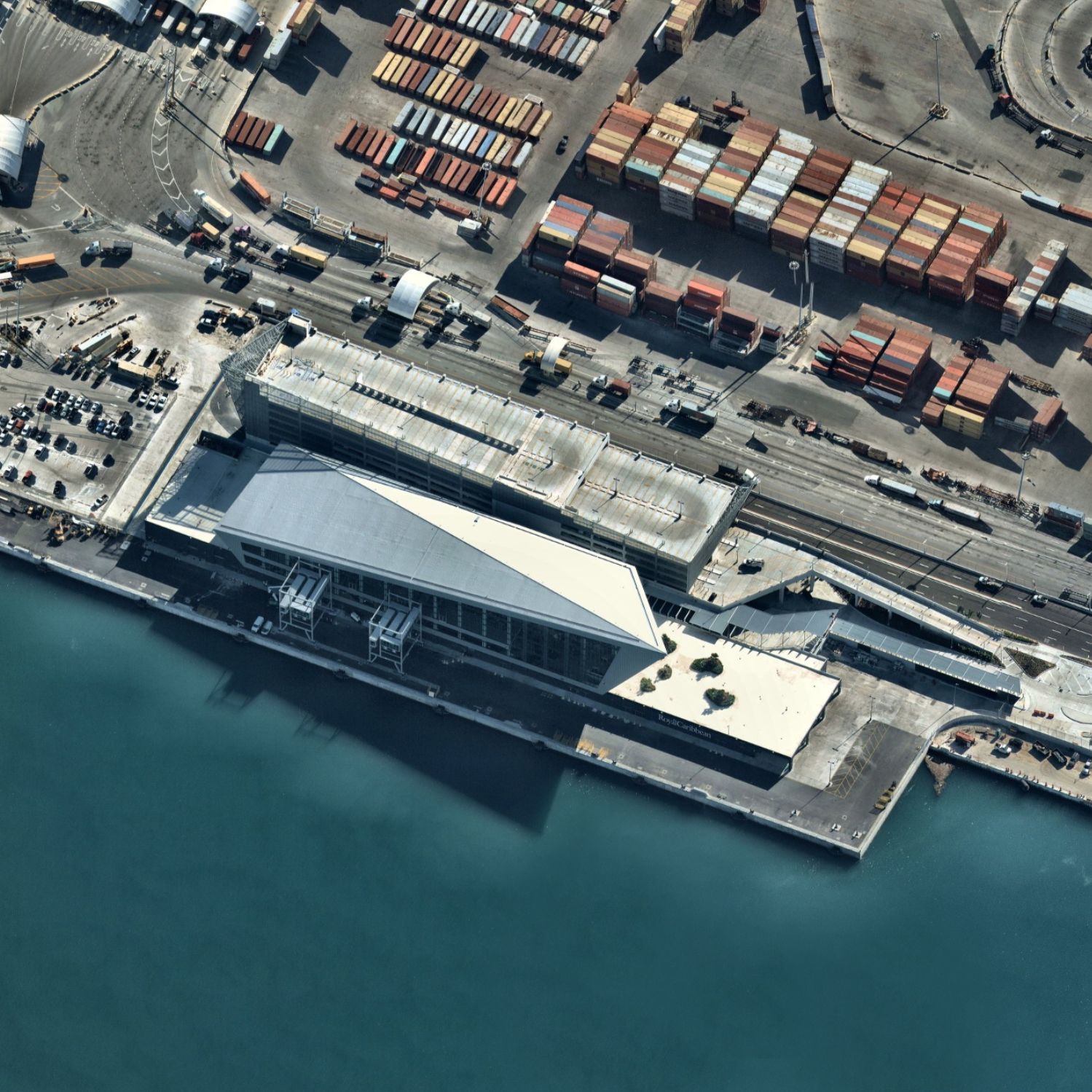 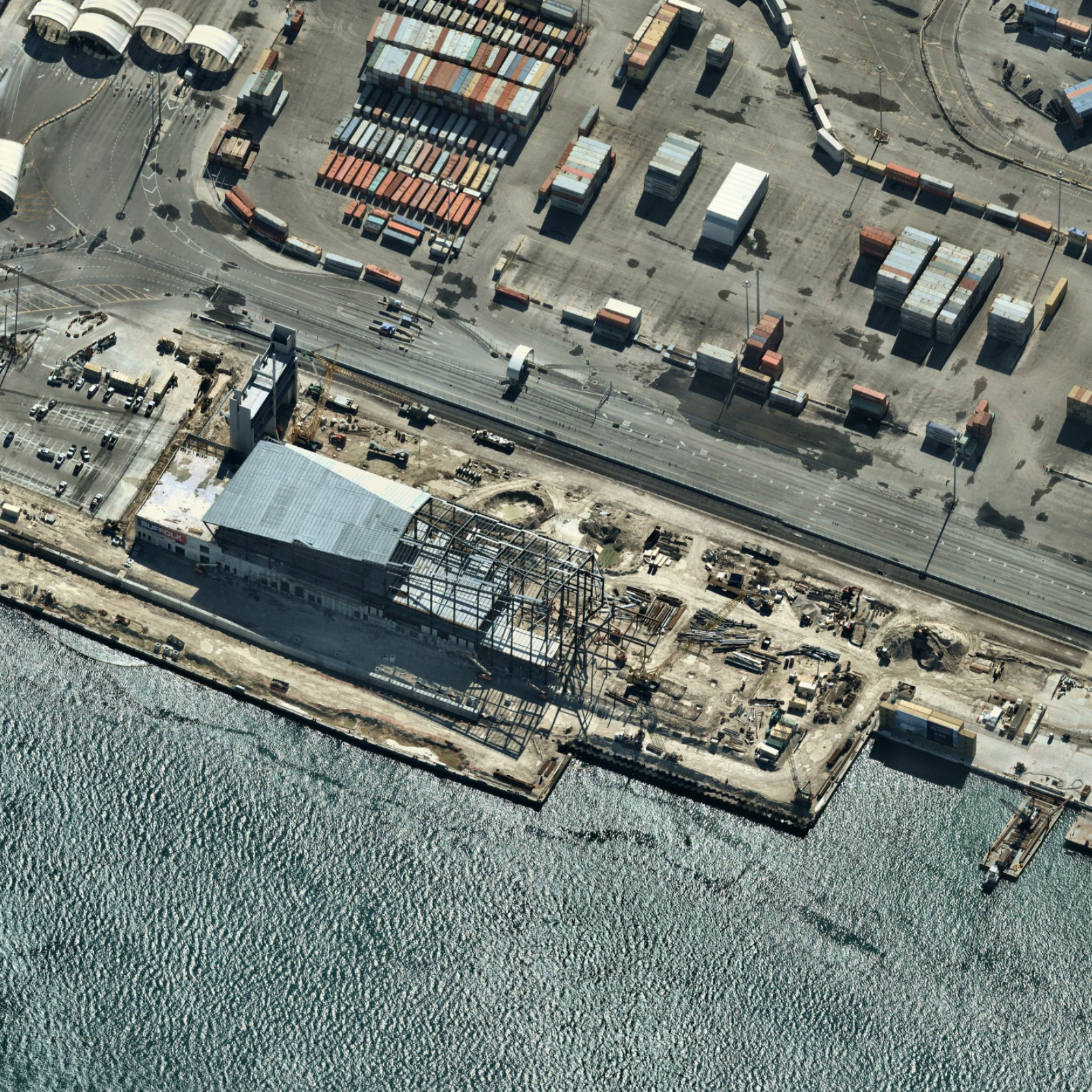 Terminal A is Royal Caribbean's new terminal at PortMiami built to accomodate Oasis-class ships, which can hold up to 9,000 passengers and crew members. The terminal was constructed over the course of a year, and is able to load up to 5,500 passengers an hour. /// 25.7739477,-80.1647717, source imagery @Nearmap

The reason for cruises' outsized impact is primarily related to the fuel that powers them. The cheapest and most common option is heavy fuel oil (HFO), also known as bunker fuel. Bunker fuels are the waste product of refined oil used in cars. When burned the process is similar to that of burning a tire – particulate flies all over, emitting a thick black soot. This soot then enters the atmosphere, coating our ice caps, changing how much light the ice reflects, and ultimately accelerates the rate of ice melt.

These fuels are often contaminated with nitrogen and sulfur, and when sulfur is burned it creates sulfur oxide, which reacts with other compounds in the atmosphere to form particles that penetrate deep into our lungs, causing respiratory problems, especially in people with asthma. And while our cars also release small amounts of sulfur oxide, 2017 emissions from Carnival Cruise ships alone emitted nearly 10x more than all of Europe’s 260 million cars combined.

Over 24 hours, a mid-sized cruise ship can create as much emissions as 1,000,000 cars. While the million number at first might seem unbelievable, keep in mind that engines must run 24/7 during a cruise, even while in port, since the luxuries onboard such as pools, roller coasters, and restaurants require significant energy. That pollution isn’t just damanging to the planet, it’s toxic to passengers onboard and those who live close to ports. Most ships lack particulate filters or catalytic converters to clean exhaust, so passengers at sea looking to enjoy the top-deck sun, are often breathing untreated fumes.

Recent investigations have found that the air quality on some ships is similar to that of the world’s most polluted cities like Shanghai and Delhi. The industry has recently tried to frame themselves as technological “innovators” by implementing ‘scrubbers’ in the exhaust system. Scrubbers pump thousands of tons of sea water into exhaust stacks, washing out sulfur and other toxic chemicals from the smoke. That water is then dumped back into the ocean, which in effect turns what would be air pollution into water pollution.

A massive bloom of cyanobacteria is seen in the Baltic Sea. This area receives between 250 and 300 cruise ships each year. Waste water dumped by ships contains nitrogen and phosphorous has been proven to feeds these blooms. Large blooms can cause an oxygen-depleted dead zone where other organisms cannot survive. /// 55.693089°, 18.730060° Source: NASA

Water pollution isn’t just limited to the residue from these fumes. Human sewage is a large component of waste from cruises that must be disposed of. Most often, sewage is dumped directly into the water. In fact, in international waters, it is legal to dump sewage. The cruise industry takes advantage of the legality, dumping approximately 1 billion gallons of sewage every year, much of which is nitrogen-rich. This nitrogen can then become a feed source for algae blooms which suck oxygen out of the ocean, killing large numbers of fish.

Beyond human waste, the large cruise companies have a long history of dumping oily water, grey water, chemicals, food mixed with plastic, and trash into our oceans. Alarmingly, Royal Caribbean was fined 27 million in 2017 for installing secret bypass valves aboard their ships that allowed them to override safety controls and directly discharge oil overboard.

The Oasis of the Seas, operated by Royal Caribbean, is seen here at Port Everglades in Fort Lauderdale, Florida. The facility is the third busiest cruise port in the world, accommodating more than 3.8 million passengers every year. This particular ship is 1,186 feet (361 meters) long and has a maximum capacity of 6,780 passengers and 2,200 crew members. /// 26.086022°, -80.115287°, source imagery: Nearmap

The environmental consequences of cruise ships are substantial and need to be addressed with solutions. The dip in passenger activity due to COVID-19 will certainly give our oceans and air a much-needed reprieve, but if cruise ships continue to be popular in a post-pandemic world they need to make huge improvements in order to stop their excessive pollution of the planet. While the record of cruise companies doesn’t exactly indicate they are willing or able to implement such solutions, there are changes they could make immediately. First, utilizing electricity from land based sources while at port. Secondly  investing and implementating innovative air filtration systems. Lastly, sewage from cruises needs to be treated and recycled. Yet, even if all these changes are put into place, it still might be in the planet’s and our best interest to move on from the era of cruise.

Perspective on the Coronavirus

A big picture view of the pandemic

Moving Away From ‘Peak Car’